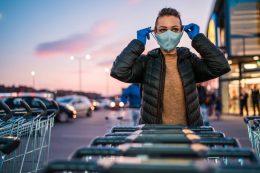 Research conducted by retail analysts, Maybe* at the start of December suggests that around two thirds of shoppers are feel unsafe shopping on their local high street during the festive period.

The Maybe* survey, which had 2,000 respondents found that 61% of participants were concerned about the safety of shopping in-person and feel unsafe, while the remaining 39% of shoppers were not concerned.

When asked what will have the greatest impact on where they choose to shop, the safety measures a retailer has in place now outweighs price as the most important factor in making that decision.

33% of participants said that safety is their most important consideration when choosing where to spend their money, followed by pricing (22%), supporting local retailers (16%) and the availability of late night shopping (16%).

In addition, the number of shoppers that feel staff wearing PPE doesn’t make them feel any safer has risen to 21% at the start of December, compared to 14% in early November, when respondents were asked the same question as to whether they feel unsafe.

“Our research suggests that to make the most of this Christmas, retailers have to place shopper and staff safety at the very top of their list of priorities. Shoppers placing importance on safety ahead of pricing represents a genuine paradigm shift for the sector at large.”

“To put it simply – if shoppers don’t feel safe in your store, it’s likely they’ll go elsewhere. It’s clear that the majority of retailers are putting COVID-safe measures in place, however the amount of consumers who don’t feel safe when shopping appears to be increasing – this suggests that more needs to be done in terms of the steps that stores are taking.”

“It’s hugely encouraging that 16 per cent of shoppers are placing emphasis on supporting local retailers during a challenging time for all high street business.”

Maybe* is an audience engagement platform which helps organisations listen and engage with customers through social media, benchmark their results, and optimise the return on investment of their activity.

It is a member of the Government’s High Streets Task Force, a consortium of experts whose objective is to help reinvent town centres and support local authorities.

Maybe* is one of the ten companies that form the force, providing data, expertise, knowledge, training and support to those involved in helping to regenerate town and city centres across the country.