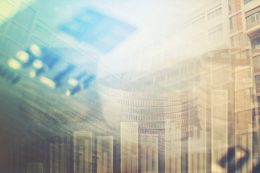 The more we look at the blockchain the less we start to associate it with cryptocurrencies. In the past, it was absolutely impossible to mention the new technology without thinking about things like Bitcoin, Ethereum and Litecoin.

However, nowadays it’s starting to form as its own thing, despite the fact that cryptocurrencies are practically based on it. Many people don’t understand that the blockchain is the foundation and cryptos are the building.

But, thanks to the dozens of helpful software created by developers through Decentralized Ledger Technology by the use of blockchain, we’re starting to see the two become quite distinct from one another.

The blockchain has managed to penetrate nearly every single industry in the world. People are able to benefit from privacy as well as transparency of the technology and be a lot more involved in the decision-making process of large businesses and etc.

Although authorities like to chastise the blockchain for having hardly traceable capabilities, it’s important to note that they themselves appreciate this major feature the most.

The Blockchain’s effect on retail

Although the adoption of the blockchain in the retail industry started through the inclusion of cryptocurrencies, it’s very reassuring to see that it has blossomed into something a lot more elaborate.

The history dates back to the introduction of Bitcoin itself. Many online platforms started to use the alternative currency as a means of exchange, thus providing early investors as well as tech supporters to popularize the coin even further.

One of the most prominent industries that supported the adoption of cryptocurrencies was the online betting sector. Companies would list cryptocurrencies like Bitcoin and various other altcoins as a means to make deposits and exchange them for local tokens. Basically, the company allowed these people to spend their cryptos in defiance of hecklers that believed it was an empty investment. Despite the volatility, most platforms managed to make a fortune by simply allowing such transactions.

Online retail stores joined the party a little after cryptocurrencies became a trend. However, large websites such as Amazon or eBay are still trying to distance themselves from it.

But, that’s beside the point. We’re here to discuss the effects of the blockchain, not cryptocurrencies on the retail industry. What can the technology accomplish that other methods cannot, and what type of value can it create for you as both a consumer and a manufacturer?

One of the main benefits of the blockchain technology for retail is that it directly correlates with the desires of a modern consumer.

People have become a lot more interested and involved in the manufacturing process of the products they purchase both online and offline. They are much more conscious about the ramifications of the manufacturing on the environment as well as the morality of treating people fairly.

Nowadays, should a company pay its employees only a very small fraction of the product they produce they’ll quickly see that once consumers find that out, they become extremely unlikely to buy again.

Furthermore, if a company’s manufacturing operations leave permanent or serious damage to their surrounding environment, the consumer base is unlikely to buy as well.

Overall, what the blockchain does is helps to trace a specific product all the way back to its origins, meaning the raw materials that it’s made out of.

This will promote not only transparency in the retail industry but also ethical farming, ethical employment and environmentally friendly businesses that try to keep their manufacturing clean.

By labeling all of these products with a traceable history, retail stores will find it much harder to promote something for what it is not. This used to be a serious issue in the fashion industry, where authentic designer clothes were in reality just knock-offs created offshore.

By adding traceability, large as well as small brands will be able to avoid having their products dumbed down and sold for much cheaper all over the world.

Basically, it’s going to ensure that a consumer gets exactly what they pay for and not a cheap version of it, promoted to be the real deal.

The only thing that remains for the future is to somehow fully adopt cryptocurrencies on large retail platforms. However, the volatility of the market simply does not allow for the transition to go smoothly, and the mismanagement of a lot of stablecoin associations is simply not trustworthy enough for large corporations.

The breakthrough may come with an industry player, not everybody is supporting or approving right now. But in terms of large global business, Facebook’s Libra seems to be the most trustworthy in terms of stability if they get all of their regulations sorted out.

It’s no issue that large payment corporations left the association. It’s expected that they will be back once all the legal issues are tended to.

Considering a link to a person’s social profile with the use of Libra (if desired), it would add even more transparency to user reviews that are starting to become the biggest influencers in a product’s sale.