At the other end of the scale from First Direct, the ‘big four’ High Street banks occupy the last four places with RBS, after a year of well-publicised mishaps, taking the ‘wooden spoon’ position at the bottom.

Overall customer satisfaction levels among bank customers have increased from 76% to 82% over the past 12 months, reflecting the banks’ efforts to improve their image and be seen to be more customer-friendly. However, Mike Fotis, founder of Smart Money People, commented: “While it’s encouraging to see that customer satisfaction has increased, the industry shouldn’t rest on its laurels as it’s clear that the public’s expectation of what a good bank looks like is still fairly low.” 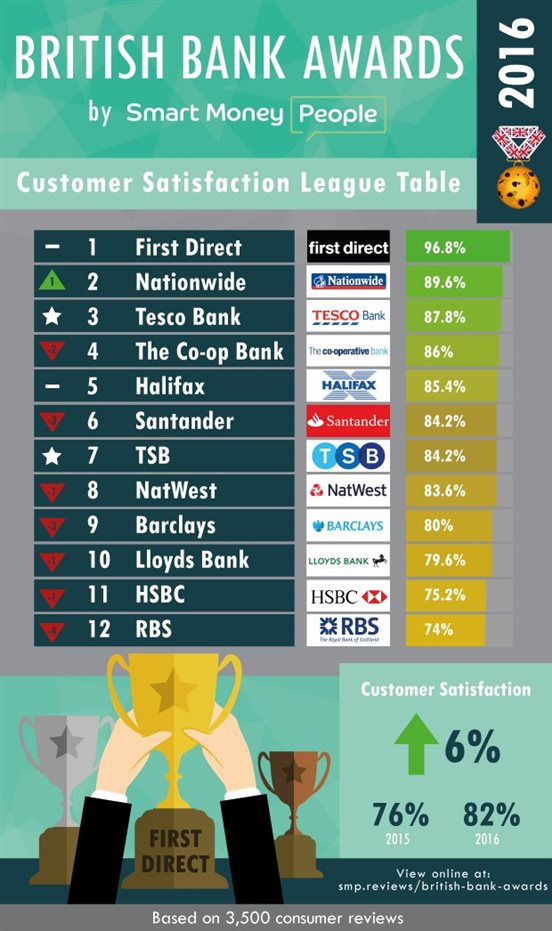 Mike Fotis added: “While good customer service remains the central reason for customer delight, the results of our awards also show that there’s an increasingly vocal segment of customers who are not fans of branch closures and automated machines. This disproportionately impacted four of the UK’s biggest banks, which now find themselves at the bottom of our Customer Satisfaction League Table.”

In a sector where the big four banks have an 85% share of the market, Business Banking remains the worst rated banking product, with an average satisfaction rating of just 71%. Mike Fotis added: “The time taken to open an account, high charges, and poor levels of relationship management have not done much to please business owners. But with a number of challenger banks looking at making inroads into Business Banking, there is hope on the horizon for UK’s businesses.”

The results of the British Bank Awards also revealed that consumers seem to be getting a lot smarter when it comes to assessing whether they are getting value for money from their financial products. Kerry Richardson of Darlington said of her Co-op Bank Current Account: “I find the benefits attached to the current account I use to be fair and good value. I pay a small monthly fee which provides me with travel insurance, mobile phone and gadget insurance, as well as RAC cover. I will continue to bank with the Co-op and am secure in the knowledge that they’re a fab bunch of people as well as being a fab company to bank with.”

Laura Hughes of Sheffield, summed up this year’s Best British Bank, First Direct, by saying: “First Direct is first class in all respects.” In contrast, Malcolm Butterworth of Birmingham said of RBS: “They are not as good as they were…you could speak to a manager once if you had a problem, not anymore. They say they will ring you back and don’t.”

The results of the British Bank Awards are based on 3,500 Smart Money People consumer reviews. All banks included in our Customer Satisfaction League Table received a minimum of 50 consumer reviews. Although not receiving enough submissions to enter our Customer Satisfaction League Table, both Virgin Money (92.6%) and M&S Bank (95.2%) provide a sign that newer banks are starting to make their presence felt.

The winners of the eight categories are listed below: