But which other online retailers were popular in 2015? How do consumers make decisions on where to buy products and how big is the impact of social networks on their purchasing decisions compared to traditional types of marketing such as newsletters and display advertising? Pepper.com, the global, social commerce group that HotUKDeals is part of, has analysed statistics from Similar Web to answer these questions.

Full-range providers were the most popular online retailers in 2015

Besides Asos, there are only two other e-commerce players with a distinctive profile amongst the top ten: Gumtree.com, a marketplace where people buy and sell products, takes fourth place with 282.2 million visits while Sportsdirect.com claims seventh place: During the last twelve months British consumers visited sportsdirect.com 100.9 million times to buy sports clothes and equipment online.

41% of all consumers browse directly to their preferred online retailer

The dominance of eBay and Amazon is a result of their brand-awareness: 47.7% of all consumers visiting eBay.co.uk during the last twelve months and 40.7% of all consumers visiting amazon.co.uk browsed to these sites by directly entering the specific URL. These online retailers have benefitted from their loyal customer base that counts on proven shopping habits, whilst most of the other shops have had to work harder to get traffic to their site. Less than every fourth customer (23.8%) visited the John Lewis online shop directly within the last twelve months, while Boots.com reached the lowest share of direct type-ins with 17%. 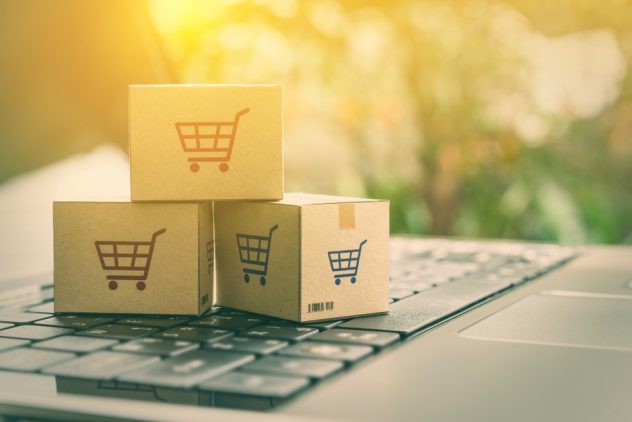 Similar Web statistics unveil that many consumers still have a significant need for orientation when it comes to online shopping. After direct type-ins, search engines have contributed the most to the reach of the ten leading online retailers in 2015 with 24.33% of all consumers visiting an online retailer coming from search engines. Google, Bing, Yahoo, and smaller search engines have contributed 1.38 billion visits during the last twelve months – 9.1% by paid advertising and 90.9% by organic search results.

Google has contributed the most to the traffic of the ten leading online retailers with 95.6% (1.2 billion) of all visits resulting from organic search results from Google while Yahoo (1.9%), Bing (0.84%), and Ask.com (0.12%) hold only minor shares. Looking at organic search as a source, Google’s dominance gets even clearer. The top ten online retailers were able to generate 121.4 million visits (96.2%) by paying for Google AdWords while the share of Yahoo was as little as 3.8%.

Search engines aren’t the only source consumers use to inform themselves about retailers before they buy online. Third-party websites were the third most relevant traffic-driver in 2015 after direct type-ins and search engines. The top 10 online retailers were able to generate 22.5% (1.02 billion visits) of their traffic during the last twelve months by featuring on external websites.

Only 3.5% of all visits came from social networks:

In 2015 social networks had a small impact on the British e-commerce market. Networks such as Facebook, YouTube, Reddit, and Twitter contributed only 3.5% (160.3 million visits) to the total reach of the top ten online retailers. There have been success stories with Similar Web showing ‘social media champions’ such as SportsDirect.com which won 21.1 million visits (20.9% of its traffic) by advertising on social media. Other retailers failed to benefit from the likes of Facebook and Twitter with only every hundredth visitor of these shops coming directly from a social network – Marks and Spencer (1.4%, 927,804 visits), John Lewis (1.5%, 1.1 million visits), Boots.com (1.5%, 1 million visits) as well as Tesco.com (1.22%, 1.8 million visits) for example.

Newsletter marketing and display advertising have only a little relevance:

Similar Web statistics also show that online retailers were only able to attract a few consumers by advertising via newsletters and display ads. On average only 2.5% (111 million) of all visits were generated by newsletters during 2015. Only Marks and Spencer (2.6%, 1.7 million visits) and eBay (2.8%, 46 million visits) were able to generate a higher percentage of visits by advertising with newsletters while the statistic shows that mailings weren’t very relevant for many retailers such as Boots.com (0.83%, 436,852 visits), SportsDirect.com (0.89%, 694,477 visits) and Tesco.com (0.91%, 1.3 million visits).

The sum of visits the leading online retailers were able to generate by advertising with display ads was even smaller. On average less than every hundredth visitor (0.96%, 1.7 million) clicked on a display ad. There were exceptions such as Marks and Spencer and John Lewis that were able to generate 1.5% (1 million visits) and 1.4% (1.1 million visits) respectively of its traffic by running display campaigns, but others were not so lucky such as Tesco and Sportsdirect.com. During 2015 Sportsdirect.com generated 0.34% (341,300 visits) of its traffic with display ads, Tesco ended up with 679,520 visits (0.47%).

These were the ten most popular online retailers in 2015: