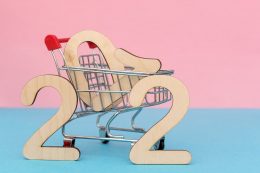 Google.com – it’s the most visited site and the most widely used search engine in the world.

With 40,000 searches made every second in the UK, totalling 3.5 billion a day, it’s no surprise that if you explore what people search on Google, and when, it can help retail businesses tap into the trends and minds of consumers and customers.

On top of that, futurists systematically research retail industry predictions, trends, forthcoming possibilities and explore what is likely to emerge from the present.

Put these two together – as they have been in ‘Moments in Marketing 2021’ – and you can aim to stay ahead of the curve to plan, procure, and market your business in a way that will help boost much needed sales in the new year after such an unpredictable 2020 taking advantage of these retail trends.

Here’s just some of retail trends and dates you need to know for 2021 from search experts and renowned futurist, Tracey Follows.

Searches for Easter gifts start from the third week of February and peak the week prior to Easter which is on Sunday 4th April this year. The most searched for gifts are hampers and baskets followed by flowers and personalised gifts. Food-wise, we look mostly for baking recipes and products such as brownies and cupcakes using popular Easter product like mini eggs and crème eggs. Although there are also searches for Easter ham and lamb recipes and increased interest as we head into 2021 for traditional Easter foods such as Simnel cake, Tsoureki and Jamaican buns and cheese.

Have bottomless brunches had their day or is this an evening alternative? There is an emerging trend for ‘Tipsy Tapas’ so we can make up for lost time in 2021 and gather with friends over some small plates. Another similar trend on the horizon for hospitality (and acronyms) are Gin Gardens. A potential alternative for bars to a beer garden that utilizes the Gin craze which is going nowhere in 2021.

The most popular foods for 2021 that Vegans want an alternative for are Burgers, Lasagne, Shepherd’s Pie and Chilli. As well as dairy alternatives for recipes such as Vegan Mac and Cheese. With Veganuary fast becoming one of the UK’s most popular health initiatives, we specifically want inspiration for Vegan meal plans, shopping lists and everyday Vegan meal recipes, whilst interest in milk, cheese, ice-cream, butter and chocolate alternatives is high.

We’re particularly interested too in what the biggest supermarkets and food chains are planning for Veganuary, with searches such as ‘Pizza Hut Veganuary’, ‘Sainsburys Veganuary’, ‘McDonalds Veganuary’ and ‘Pizza Express Veganuary’ also on the up.

Singles Day creeps up on Valentine’s

Singles Awareness Day, also known as Single Appreciation Day, comes the day after Valentine’s Day on 15th February and our online interest in it makes it one to watch.

Around Valentine’s Day and Single’s Day, our interest in dating apps peaks on the 11th January and 8th February whilst the 8th February is also when we start looking into speed dating.

People spending more time at home has resulted in a surge in puppy and dog sales. Cockapoos are the most searched for puppy breed whilst in March 2020 there were clear spikes for ‘Dog Grooming Kits’ which coincided with Crufts – which will take place this year on 15th July.

For both Christmas and Halloween some are the biggest search volumes are around seasonal dog outfits and in 2020, whilst general searches for Halloween costumes fell, ‘dog Halloween costumes’ bucked the trend and increased. Searches for ‘Dog Christmas Jumper’ start to increase from 3rd November whilst Halloween dog costumes become particularly popular around 19th October before they peak on 24th October.

Customers are also twice as likely to search for a spider Halloween costume for their pooch than a pumpkin doggie costume.

Pay by card or palm?

Futurist Tracey Follows said: “Accelerated by the need for hygiene, all kinds of new contactless payment technologies will emerge including biometric-like facial recognition, palm scanning and even perhaps ‘smile to pay’ as transactions become less about physical contact with another human being and more about remote contact with a machine.”

Can I return this? Christmas Edition

The term ‘return without receipt’ peaks from 24th December which can potentially be pinned to two audiences. Firstly, people anticipating if and how they can return unwanted gifts they receive and secondly, people who are doing their final bits of organising and wrapping on Christmas Eve who realise they have bought twice for someone by mistake or have overbought for a person in error.

Each year, Facebook is filled with pictures of families enjoying World Book Day on 4th March. This is also closely followed by International Children’s Book Day on 2nd April.  Diary of a Wimpy Kid, Harry Potter and Alice in Wonderland are the most popular children’s books according to the research whilst the most popular authors are David Walliams and Julie Donaldson.

Pumpkin flavour overall isn’t going anywhere either as we’re seeing people more interested in pumpkin food recipes too, namely Pumpkin Pie and Pumpkin Soup. So, expect more of the edible, sweet pumpkins to be planted already by farmers for 2021.

Our desire to buy personalised items for friends and family continues and is something we now search for in high volumes on many key holidays. Christmas will continue to be a key time for this, but personalised presents are also high on peoples’ agendas for Mother’s Day and Easter.

We start to search for Black Friday from the very first week of December with searches then going on to peak around 22nd November, presumably when all the marketing is in full swing.

As we know, many retailers run offers for the week of Black Friday and consumers don’t expect anywhere to only run offers for one, despite the name Black Friday. This is why Black Friday in future years could be officially renamed and simply become ‘Black Monday to Friday’ as it becomes even more prominent.

According to futurists, Christmas 2021 will be intimate and personal after a difficult 2020. Although online purchases will continue to rise, purchases will be very considered and well thought out whilst sustainable gift wrapping, and local food produce will be important to people.

The term ‘shop small’ sees a huge online surge in the first two weeks of December whilst the first week also sees ‘Christmas Decorations’, ‘Christmas trees near me’ and ‘Christmas nails’ at their highest search volumes.

From around 7th December, Secret Santa’s start and we’re looking for present ideas and gifts under £10.  It also appears that men consult Google for general gift inspiration with “Christmas gifts for her” being a more popular search term than “Christmas gift ideas for him”.

To discover Tracey’s futurist retail trends and predictions by month in 2021 and Google search trends data head to takepayments.