Are there ways to bridge the gap between online and offline retail?

Historically, retail has shifted from offline to online. Argos, for example, was famous for its in-store catalogue experience before branching out to become one of the most successful e-commerce brands in the UK.

As shopping online became more popular, we began to see online-only retail pop up, such as market leaders ASOS and Amazon. But what about when the shift happens the other way around, and online stores go physical?

In this article, we’ll discuss how pop-up shops are allowing online brands to reach customers in person. We’ll also explore some of the most successful online shop pop-ups.

The popularity of pop-up shops

Pop-up shops brought £2.3 billion to the UK economy annually prior to the COVID-19 pandemic. We could see this rise again with most restrictions eased. 80% of global retailers who have opened a pop-up shop said it was successful, with 58% saying they would do it again.

While the pandemic put a pin in pop-ups, there were still some successes. In April 2020, Tesco opened up a pop-up supermarket for NHS staff at the Nightingale Hospital so they could access essentials. Similarly, Costcutter opened up pop-up shops in 20 NHS hospitals.

Pop-ups can come in many forms, from hired event venues to empty stores – and even storage containers! Superdry perfectly captured its vintage-inspired brand through its pop-up store housed in a branded storage container.

Many big-name brands, including Primark, Louis Vuitton, and Disney, have seen success through pop-up shops despite having flagship stores across the UK. We’ve also seen traditionally online-only retailers use pop-up stores as a way to connect with customers in person.

Pop-up stores offer online brands the opportunity to build brand awareness – many brands cited this as the main reason for launching a pop-up shop. Online stores can achieve more sales, better market visibility, and even social media engagement if the pop-ups are interesting enough. 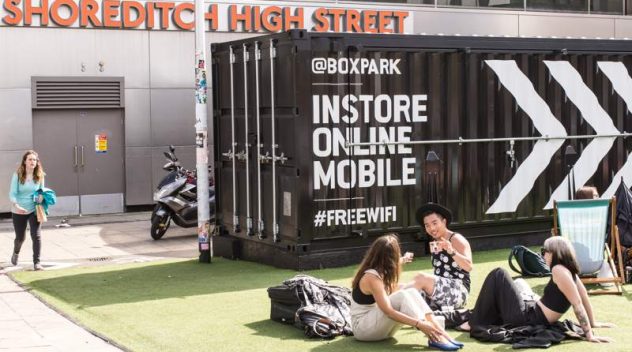 Below, we take a look at a couple of successful examples of pop-up shops launched by online-only brands.

London-born shopping app Depop was founded in 2011 and is partly credited for the rise in consumers buying and selling second-hand clothes online. The company exists online only, with no physical stores, but it launched a live pop-up event in 2019 that “brought the app experience to life”.

The event not only saw vendors selling unique second-hand clothing, but also incorporated talks, DJ sets, and DIY workshops. The talks centred around how the brand’s primarily young female audience could make the most of its features, with panel discussions including “How to Build an Empire From Your Bedroom”. The brand prides itself on users recycling one-of-a-kind items, and many of its other talks focused on this and sustainability.

Maria Raga, Depop’s CEO, said: “This event is an opportunity for us to showcase the creativity that takes place on our app and to surround them with other inspirational creatives from the fashion, art, music, and design worlds.”

Amazon pops up to say hello

If there’s one online-only store that comes to mind for everyone, it’s Amazon. The online marketplace has grown exponentially since it started as a virtual bookstore, expanding to sell almost anything you could imagine.

The company has run a number of pop-up shops, with regular events across the USA. In a similar vein to Depop, the company hosted five days of pop-up fashion events in London, which featured more than just a retail experience. The fashion and beauty events included DJ sets, makeovers, and styling sessions with Amazon Fashion stylists. Additional days included yoga sessions with author Ella Mills and acoustic sessions with musicians Tom Grennan and Nao.

The brand also has themed pop-up stores that allow customers to examine items that they might not want to purchase online without testing out first, such as beds and hardware.

Our shopping experience has pivoted largely to online shopping, and we’re seeing this through the closing down of many established high street retailers. This doesn’t mean in-person shopping is dead, though. Online retailers are now bridging the gap and offering unique offline retail experiences at an affordable price. While many are hiring dormant stores, we’re seeing more mobile pop-ups emerge, allowing these retailers to be flexible and reach more consumers through these new means.