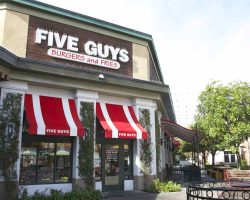 An in-depth industry study from Market Force Information reveals the UK’s favourite places to grab a bite to eat and to stop for coffee. Five Guys Burgers and Fries has been crowned Britain’s favourite fast-food restaurant, taking top spot from last year’s winner Nando’s. In the café category, Pret a Manger was chosen as number one for the second year running.

More than 4,565 UK consumers were asked to rate how satisfied their last experience at a given restaurant or coffee shop was and how likely they would be to recommend it to others. This data was averaged to rate each brand on a Composite Loyalty Index which benchmarks overall satisfaction and likelihood to recommend.

The Market Force study also looked at the specific attributes that drive satisfaction, analysing factors such as speed of service, food quality and value for money. With between one in five and one in eight people saying they were dissatisfied with their most recent eating out experience, and may prefer to stay at home with their own coffee maker rather than go to a coffee shop. This information offers insight into areas where higher levels of service can make a big difference to overall satisfaction.

Pret A Manger retained its position for a second year running, while Caffè Nero has leapfrogged Greggs into second place. Greggs is just behind however, closely followed by Costa Coffee and Starbucks. Overall, one in eight customers reported dissatisfaction with their experience in a café, revealing plenty of room for improvement.

Consumers also rated restaurants out of five on various attributes relating to satisfaction. Pret A Manger very nearly swept the board by being rated as top in all but one category with Greggs taking top spot in the crucial value for money category. Greggs also scored well on food quality, speed and availability of healthy options, while Caffè Nero was recognised for staff friendliness and atmosphere.

Cheryl Flink, chief strategy officer for Market Force Information, comments: “The popularity of speciality coffee in the UK has exploded and shows no signs of slowing. Our research shows that this sector is intensely competitive. Although Pret a Manger scores best, the other brands have very similar guest ratings and will need to focus on product quality and the service from staff to differentiate. ”

Other findings from the café category

Five Guys, which launched in the UK in 2013, has swept to success by fending off tough competition from last year’s number one Nando’s. Gourmet Burger Kitchen (GBK) placed third, followed by KFC. Overall in this category, a fifth of visitors reported an unsatisfactory experience.

Nando’s top for speed and value, but Five Guys wins on food quality and friendliness

Consumers again scored each establishment out of five on a range of attributes. While Nando’s scored the highest percentage of top marks for five out of eight attributes, exceptional performance from Five Guys in the food quality, cleanliness and staff friendliness categories was enough to earn overall success. Elsewhere, consumers recognised Gourmet Burger Kitchen (GBK) for its healthy options.

Other key findings from the burger/steak/chicken/grill category

The best of the rest: Additional findings

In addition to burgers and coffee, the research looked at four other categories: pizza, Sandwich, pub/bar and Italian.

A final area of research was into the use of technology in restaurants: