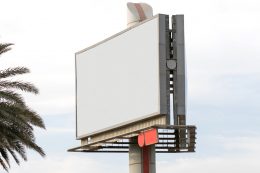 Billboards have long been on of the most popular physical marketing tools in the world.

Just about every city and town around the globe will have a billboard like this, and they have proven to be a great way for companies to get their voices heard. Of course, though, while this form of advertising can be great, it can cost quite a bit of money, and a lot of people want an alternative. Is it possible to put your own billboard up?

The first thing you’re going to need when you’re approaching something like this is land. You can buy or borrow this, with the latter often being the much better option. This needs to be in a location which a lot of people will see, with roadsides being one of the best places for billboards. If you plan on using someone else’s land for this, you will need to make sure that you have their permission before you put the billboard up.

Along with permission from the owner of the land, you may also need to get permission from your local government. This won’t be a requirement in all locations, but it will be worth checking this before you go much further, as they could ask you to take the billboard down if you don’t as to put it up in the first place. This can be a challenge, as a lot of places don’t want to have more billboards cluttering up their landscapes.

Once you have a place to put your billboard and permission to erect it, it will be time to come up with a design. As this is something which a lot of people will see, it will make sense to hire a professional designer to handle this for you. You need to be able to read a billboard quickly, while getting as much information as possible, and it can be hard to convey what you need to without the right experience.

The tools and team

Most people don’t have the skills they need to put a billboard up. This is something which will take a lot of skill and effort, and it will be hard for you to find a way to get something like this done without some help. Crane hire companies will be able to provide the machines, but you may also need to look for a construction crew to do the heavy work.

Is a billboard worth it?

Once you’ve gone through this whole process, you will have spent quite a bit of money and time, and probably won’t have a huge amount to show for it. Going down the traditional route and paying for a normal billboard will probably be cheaper, and won’t have the same potential to waste your time.

With all of this in mind, you should have a good idea of what it would take to put your own billboard up. This could be worth it for some businesses, but will most likely be too much work to be worth it for yours.