Entrepreneurs, Andrew Phouli and Stelios Andrew founded Rush Hair 20 years ago after meeting at college and developing their ambitious plan to open a group of nationwide salons offering the highest technical standards of hairdressing and customer service.

Today, Rush Hair is an exciting, dynamic, forward thinking collection of 62 hair salons across London and the South East that is now looking to add to its portfolio of franchise salons.

With the opportunity to franchise one of the potential 40 salons opening nationwide in the next 18 months, now is the time to join the Rush Hair movement.

How many salons are there within Rush today and how many of these are franchise outlets?

Rush Hair and Beauty currently have 62 salons in total across the group. 24 of these salons are franchise owned.

There seems to have been a real growth spurt over the last few years – did the recession hinder growth at all? 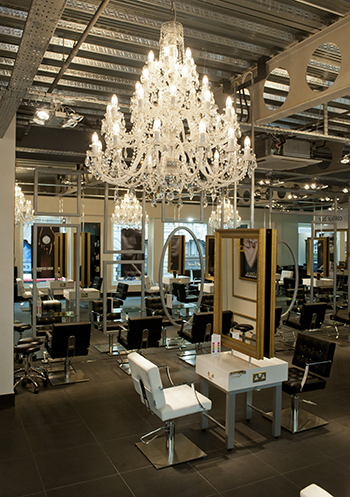 In 2010, Rush embarked on a strong expansion plan. With a goal to grow and develop salons within Central London and in that year, 16 salons were opened in rapid succession. In doing so, this helped to establish the brand. Whilst in the middle of a recession but growth plans in place and ready to start, recession or not, Rush was ready to expand. After a year of expansion, a decision was made to plan the opening of, The House of Rush, the flagship salon, which opened in November 2011. With growth plans already in action, the recession did not hinder expansion in any way however, continually re- assessing and re-evaluating every decision made.

What are the challenges with growing a franchise business – i.e. maintaining standards, brand integrity etc. and how have you met these challenges.

There is a strong team behind Rush, which supports not only the franchises but the company owned salons too. As with any business, it is important to have good systems in place and to continually look at what works and what doesn’t. The most important factor is to make sure there is communication – when communication breaks down that’s when you have challenges. Our operations team for example, constantly talk to franchisees, visit the salons, and ensures everything is on track to help overcome any challenges. People buy into the franchise model – the support that is given has to be consistent – it doesn’t end once they’ve opened the salon – it’s a partnership – sharing in the successes and in the failures – that’s why having strong systems and good communication is so important.

Would you still describe Rush as a family company?

Rush is definitely a family business.  Andy and Stell come from a strong family culture – there are many family members working in the business – Andy the Chairman, his son Peter is Vice Chairman and Phoulla, Andy’s sister heads up the beauty department. Artistic Team members, Andy Heasman and Tina Farey have been with the company for over 15 years, they are part of the family – it’s a large one, still growing – it’s the Rush Family.

Do you have a growth target for the next few years and can you reveal any strategy for how you intend to achieve this?

There is a strategy in place and part of that is to expand the franchising division and open new salons. There are several new salons in the pipeline for 2014. With also new plans to expand the brand outside of London and the South East – as they say, it’s all about location.

Where would you like to see Rush in the next 20 years?

The last 20 years of Rush have been amazing – Never had Andy and Stell dreamed Rush would have achieved so much when from when they opened their first salon in Wimbledon. A lot of the growth happened organically – amongst the family of Rush it has some amazing franchisees, managers, salon stylists and art team members all backed up by a great head office team. Rush is all about its people and the culture it has created. There are big plans for Rush, with an aim to have a total of 100 salons in the next 18 months. Starting with two new salons, Loughton and Northwood, which both open in November.

In 20 years time Rush will have maximised the opportunity for growth and development for the company. With the expansion of new salons opening across the UK and internationally, and finally, winning a few more British Hairdressing Awards along the way.

With numerous business and creative award wins, an enviable international reputation, unrivalled head office support and exclusive brand developments with a leading high street retailer, there has never a better time than to become the future of Rush Hair by opening your own franchise salon. To find out more, call now on 020 3773 5968 or contact us via email, franchising@rush.co.uk.