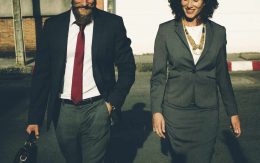 In this article with the help of Lookers, retailers of the used Ford Fiesta, we take a look at the most successful co-branding campaigns to have taken place, from tasty treats to world record breaking achievements.

The music industry has offered up some of the most majestic collaborations in the past. Much like fish accompanies chips, and pasta is perfected by pesto, Justin Bieber recently aligned with Ed Sheeran, pulling yet another phenomenal track from the locker. Over the years, our ears have been blessed with collaborations between The Pogues and Kirsty MacColl, Dizzee Rascal and Florence Welsh, and of course, David Bowie and Queen.

The end result which came from these rather unexpected pairings was nothing short of spectacular. In a similar fashion to dipping your McDonalds chips into your milkshake, combining these lyrical geniuses made the world think, ‘Why has that never been done before?’.

These collaborations aren’t just limited to the music industry. In fact, many have occurred within big business, and we aren’t just talking about brand endorsements, although they certainly have a significant impact in their own right.

It seems like a lifetime ago that the world was awash with iPod Nanos. But, back when the click wheel in the centre of the music device dominated all our lives, a longstanding and fruitful relationship between two of the world’s biggest brands was experiencing its honeymoon phase. Despite the fact the vast majority of phones now track your daily steps, back in 2006, the collaborations of Nike+iPod, which included addons for jackets, tops, and shorts, was nothing short of revolutionary.

What transcended from this was an unpredictable fusion of exercise and music, one that changed the way we not only workout, but live our lives. Succeeding the initial development of Nike+iPod came the Nike Run Club App. Then came the rather inevitable, Apple Watch Nike+, which once again transformed the running experience. From the very first moment Nike+iPod was launched in New York, the brands were allowing for a personal trainer to be running with you at all times — virtually.

Speculation of the second and the fifth biggest car manufacturers in the world teaming up was always going to raise a few eyebrows, and so it did. The Americans, who laid down the gauntlet in the motoring industry back in 1903, have been responsible for some of the most memorable cars in history. Gone in 60 Seconds, GoldFinger, and 2 Fast 2 Furious have used Ford Mustangs, while the German brand Volkswagen have rolled out the likes of the infamous Polo, or Herbie’s Beetle.

The two automobile giants have come together to forge alliance over a new all-electric, all-autonomous vehicle. Argo AI, a concept initially developed by Uber and Google, was, in the first instance heavily invested in by Ford, prior to Volkswagen’s arrival.

Herbert Deiss, Volkswagen CEO, talking to Wall Street Friday commented on how ‘both companies are complementary, with VW performing well in both Europe and China, while Ford dominating in America.’

Despite the fact we are still unsure about what lies ahead in terms of the merger, we are excited.

It would be unfair to look at just Cadbury’s decision to team up with American snack giant, Oreo, as quite frankly, what delectable good hasn’t been wrapped inside a Dairy Milk bar? Can you remember when chocolate existed as a standard bar shaped entity? If you can, it must be a long distant memory.

‘Creations’, as they have otherwise come to be known, have provided us with some of our favourite guilty pleasures, including Dairy Milk Ritz — who’d have thought it? The confectionery giants, who are the second biggest in the world after Mars, have been part of the Mondelez International family since 2010. Teaming up their popular chocolate bar with Oreo wasn’t necessarily the most outrageous decision, and it should come as no surprise that the collaboration proved a mouthwatering choice throughout the globe. That said, however, pairing Ritz crackers, notoriously a fan favourite amongst the savoury supplicants, with the milky chocolate could have backfired quicker than Del Trotter’s Reliant Robin.

More whacky than sweet married with savoury, however, was the combination of Cadbury’s hallmark Crème Egg, with Heinz’s ‘Seriously Good Mayo’. Initially promoted as an April Fools’ Day Joke in 2018, on Heinz’s 150th anniversary, the decision was made to launch the new product. Despite skepticism, professional tasters from both firms promised a creamy sensation, suitable to be paired with any crumpet or pancake alike. Who knows what the future holds — we’ve had chocolate eggs, what about chocolate chickens?

When you think of extreme sports, both these brands come to mind. Red Bull has, for many years, established itself as far more than just an energy drink — it’s a way of life. The brand effectively promotes living life on the edge while competing at the highest level. For this reason, when one considers Red Bull, they don’t just point to the taurine-based fizzy pop. Instead, the mind wanders off to cliff dives, motorsports, and soapbox racing.

It isn’t then hard to imagine why Go Pro have collaborations with Red Bull. If you’re going to question the laws of physics on a daily basis, stepping out of your comfort zone, you’ll want to capture the journey on camera — enter Go Pro.

Co-branding focuses on bringing mutually beneficial success to all involved parties. Red Bull throw an event, supply the competitors and visitors with energy drinks, and provides them with a platform to put on a show. Meanwhile, Go Pro offer up the tools to capture every moment as stunning footage. A Go Pro user starts to drink Red Bull following the event, while a Red Bull drinker in attendance didn’t realise the potential quality the Go Pro could deliver. The result — two new customers.

Back in 2012, Felix Baumgartner, an Austrian skydiver and self-professed daredevil, took to the stratosphere with help from Red Bull and Go Pro. Jumping from a helium balloon, Felix broke the record for the highest free fall jump, almost 39,000 m. He also snatched the record for the fastest free fall, 843.6mph. Without so much as having to get involved with one another’s product, the two companies successfully boosted each other’s prominence even further onto the world stage.

Admittedly, some things just don’t belong together, and we won’t get involved in the ham and pineapple debacle. Whether it be scrumptious foods or automotive innovation, we will welcome these collaborations with open arms.