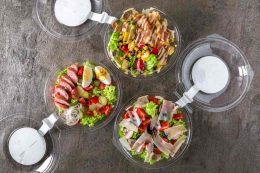 Given its ubiquity across the world, it’s unsurprising that McDonald’s dominated searches for branded fast food companies. Data collected by Betway have thrown up some very interesting findings. The burger-flipping giant that is McDonald’s is the world’s largest restaurant chain in terms of revenue and, as of 2018, had 37,855 outlets in 100 different countries.

According to the data collected, forty-one of 81 countries for which data was available searched for McDonald’s more than any other restaurant or branded food takeaway.

The highest concentration of those searches came from Europe, with 26 of the 30 European nations hankering for a Big Mac. KFC was the second-most popular fast food joint, topping the charts in 23 countries, including the United Kingdom, Australia and South Africa.

But incredibly, the country that most craved the Colonel’s secret blend of herbs and spices was Malaysia, amassing an average of 301,000 searches per month, more than any other country.

It is estimated that KFC serves 25m customers every month in Malaysia – only 6.5m fewer than its entire population. The menu offers various localised items like rice congee – a type of porridge – and teh tarik – a milky tea that is popular in southeast Asia. The most popular company in one specific place was Pizza Hut in the USA, which averaged 1.83m searches per month between March and May.

Which countries are ordering the most takeout food? 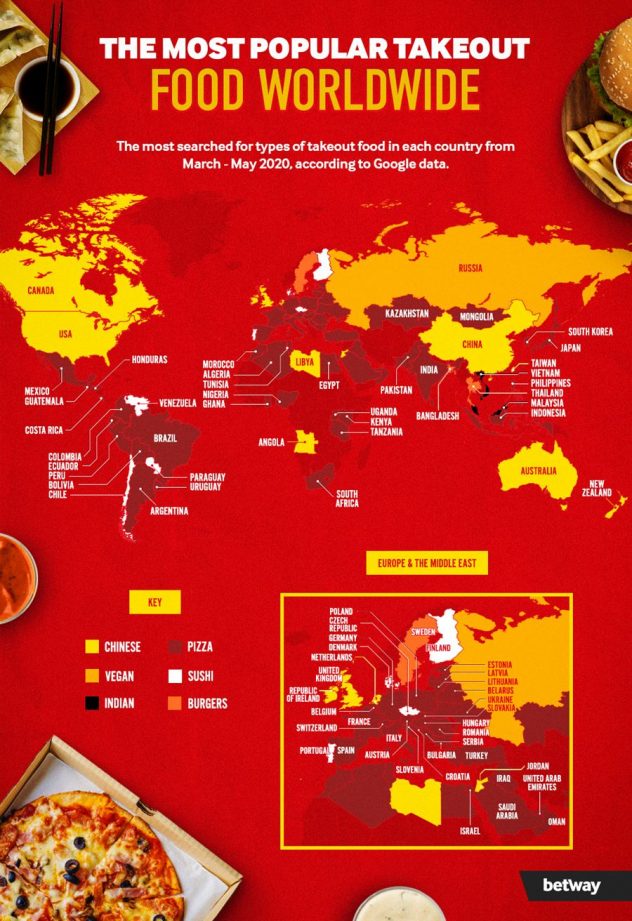 According to data from Google Keyword Planner, there were 26.6m searches for ‘delivery’, ‘food delivery’, ‘takeaway’ and ‘takeout’ between March and May, with the USA accounting for 10.5m (39%) of them alone.

But per capita, the USA only ranked second among the countries with the highest volume of searches, with one for every 31 members of the population during the three-month period.

Topping the charts was Belgium, with one search for every 10 people.

Next on the list were Australia and the United Kingdom, with one in 40 and one in 44 respectively.

Despite recording the fifth-most searches for takeout food among the top 10 countries, India had the fewest per capita with one for every 1,457 people.

How has the demand for takeout food changed over lockdown? 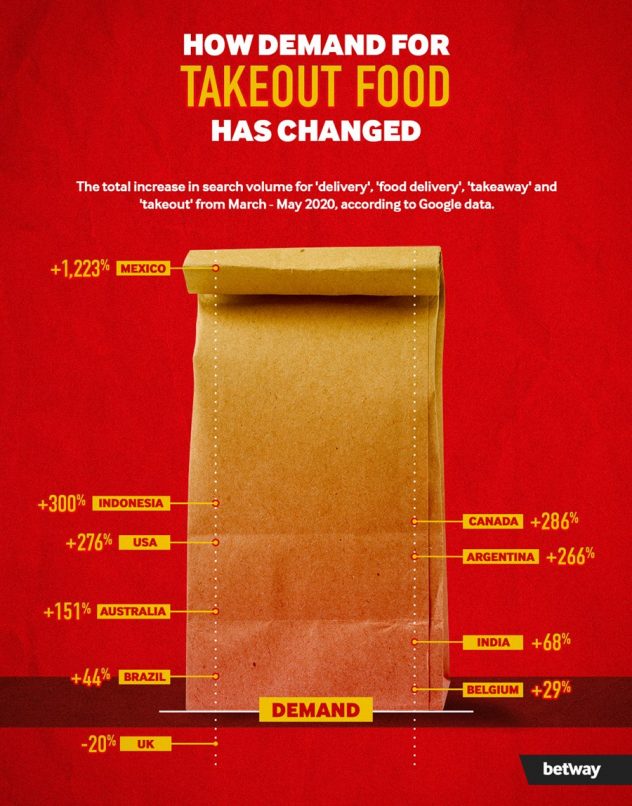 When things get tough, we turn to comfort food; burgers, pizza, kebabs and more. It is therefore no surprise that takeaways offering such food items have seen large increases in demand for their comfort foods.

The country that saw the biggest spike in takeaway orders and sales was Mexico, with monthly searches increasing by a whopping 1,223 per cent. According to Google Keyword Planner, there were 31,480 in March compared to 416,400 in May.

The reason for this is probably the late closure of restaurants in Mexico, with most places shutting their doors on 23 March.

Interestingly, despite posting the third-highest search volume between March and May, the United Kingdom was the only nation in the top 10 whose demand for takeaway food actually decreased during the same period, by a total of 20 per cent.

How are people ordering their food? 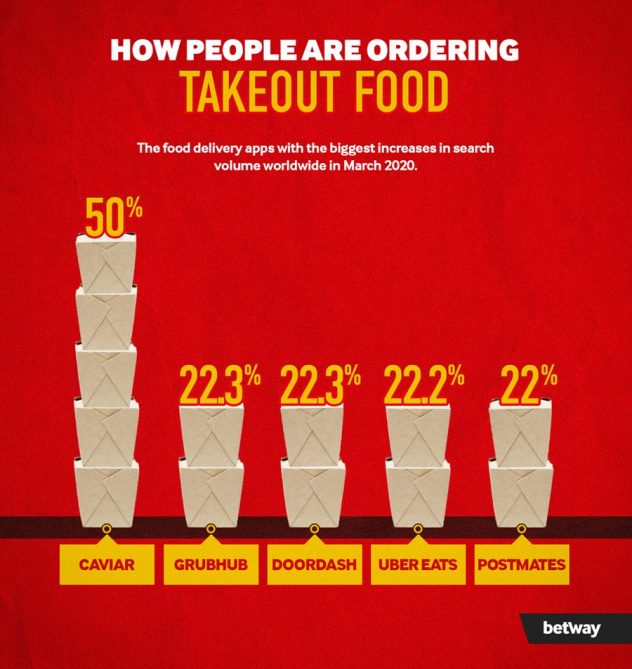 With USA dominating the volume of searches, it’s no surprise that the most popular takeout food apps over the last three months have all been American companies.

Caviar – a food delivery service operating in 11 different states including New York, Texas and California – saw the biggest increase in search traffic worldwide with numbers increasing by half in March. Searches for Uber Eats increased by 22.2 per cent, while it was also the only app in the top five that was more popular outside the USA.

Uber Eats is available in over 6,000 cities across 45 countries and per capita, was searched for the most in Taiwan.

Have we all just been eating?

Many of us have been piling on the pounds and eating our way through lockdown no matter where we live. However, many of us have also been thoroughly productive with people re-evaluating their financial lives and practices (more information), learning new languages, taking a much-needed break and doing all of those DIY jobs around the home which have needed doing for a while. Turns out we haven’t all just been eating…some of us have done more than others.