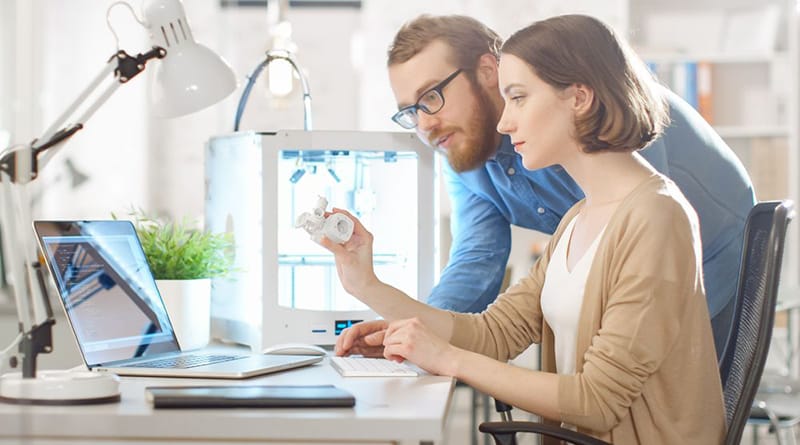 3D product modelling is changing the face of online retail and consumer shopping habits. Two thirds of consumers have increased their online shopping since the pandemic and brands are responding in order to stand out.

We are seeing a boom in the use of 3D technologies, including product modelling – which often go hand in hand with augmented reality (AR) – as a tool to make e-commerce sites pop, and brands are already seeing amazing results.

For example, when pram and pushchair retailer Bumbleride decided to create 3D models of its products, the average time spent by customers on the site increased by 21% and their conversion rate improved by 33%.

3D models are photorealistic portrayals of real-world products that can be seen on screen. Essentially, just about anything you can photograph can be turned into a 3D model – from furniture and shoes to cars and everything in between.

If you already have high-quality images, they can also be turned into 3D models.

There are multiple benefits to brands using 3D modelling on their websites. Firstly, it brings the products to life, giving customers the most realistic representation of what it would look like.

Unlike 2D photos, with a 3D model you can see every angle of something before you buy it. Furthermore, the model will be true to the size, shape and colour of the original product. Additionally, with AR technology, consumers can even see exactly what the product will look like in their own home by overlaying the product in their environment, completely changing the way we think about ‘try before you buy.’

This means that now with 3D modelling and AR technologies, you can search the internet for a sofa, see a perfect 3D replication of the one you want and then see how it would look in your living room, all with a few clicks.

Secondly, 3D models can also be used in display ads. Since Google expanded its Swirl 3D display ad format, it has become even easier to create smart-looking advertising using this technology.

British automotive brand MG Motor recently created a 3D display ad for their new compact SUV where viewers could zoom in, rotate, pan around, and look at the car from all angles.

This campaign generated incredible engagement rates, eight times higher than rich media. The success is recognised industry-wide, with research showing users are 27% more likely to make a purchase when they’ve interacted with a 3D model and 65% more likely to purchase when viewing a product in AR.

These display ads don’t need to be entirely product-focused either – pet food company Purina used Google Swirl to let potential customers play with a 3D model of a dog on screen, an ad which they say saw six times the engagement when compared to a standard 2D advert.

Another simple benefit of using 3D product modelling is the increase in SEO performance. Google scans webpages for 3D models and ranks websites using them higher than those who don’t.

It’s also important to note that you can use the same 3D model to create different colour variations, animations and augmented reality experiences, so they don’t just have one use. This means converting a product into a 3D model can be continually lucrative and very easy.

Research shows that more than eight in ten customers will activate the 3D view on a product page if that site allows for 3D product representations. Furthermore, more than nine in ten shoppers say they prefer interactive 3D representation to video playback. This has led to increased conversion rates of 250% on product places, all thanks to 3D models.